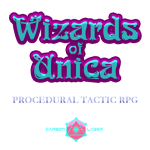 Wizards of Unica will be a tactical turn-based RPG with an heavy focus on emergent gameplay and procedural generation of levels.

Wizards of Unica is about two wizards battling each other for their own motives. In this game magic comes from making pacts with powerful spirits to harness their powers. The game is then about exploring different locations to fight powerful spirits and acquire new powers while your rival is doing the same.

The gameplay will be centered around using and combining the powers that you have acquired. For example you could use “ice” to freeze a path under the feet of your enemy and then use “wind” to push them to their death at the bottom of a pit or join them together to cast a power blizzard that will hurt and slow down enemies in an area of effect.

This mechanic joined with the impossibility to get all the spirits on the same run will create a game where strategy and tactics blend together to form a deep and replayable experience.

Development Details. We switched to Godot at the begin of 2018.